In 2016–17 work continued on a major project that focuses on the factors that support children and young people’s engagement in school, learning and education. This project has been informed by a literature review on student disengagement undertaken by Telethon Kids Institute for the Commissioner and published in June 2015, which identified that the views of children and young people is lacking on this topic. The project is supported by a Reference

Group comprising representatives from all education sectors, academics and government and non-government agencies.

The Commissioner’s 2016 Advisory Committees also provided advice, ensuring the development of this project was informed by children and young people.

The first phase of the project, the School and Learning Consultation, comprised a state-wide survey and group discussions. More than 1,800 children and young people participated and provided their views about factors that influence their engagement with school and learning. The consultation involved Year 3 to Year 12 students from 98 government, Catholic and independent schools across WA.

The report of the consultation will be tabled in the WA Parliament in the second half of 2017.

The Commissioner’s Advisory Committees provide children and young people with the opportunity to have their views heard by the Commissioner and his staff and contribute key projects.

Each committee was then invited to design and deliver a creative project that enabled their friends and peers to contribute their views on factors that influence their engagement in education.

The reports from both of these committees are available here.

The Commissioner has appointed two Advisory Committees for 2017 who are supporting the Commissioner’s work to consider innovations in mental health services. The 2017 committees are:

The Committees took part in the 2016−17 Thinker in Residence on the theme ‘supporting the mental health and wellbeing of children and young people through social media and technology’.

The Commissioner regularly visits regional and remote WA to provide an opportunity for children and young people living in these areas, as well as their families and those who work to support their wellbeing, to have their views heard.

The information gained during these visits allows the Commissioner to promote better access to services for children and young people and their families living in regional WA.

In 2016–17 the Commissioner undertook regional visits to the following towns and communities: Laverton, Leonora, Carnarvon, Geraldton and Northampton.

In addition to his regional visit program, in the last year the Commissioner also visited communities in the Kimberley, Pilbara, Goldfields and Wheatbelt as part of the school and learning consultation, met with child protection, health and police officials in the Pilbara and attended a policing conference in the Goldfields. 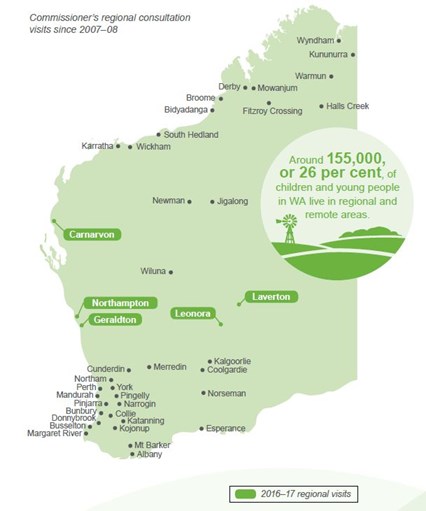 December 2017 marks the 10th anniversary of the establishment of a Commissioner for Children and Young People in Western Australia. To mark this milestone, the Commissioner has created a project to celebrate a key function of his office to seek the views of WA children and young people and promote them in the WA community.

The We Are 10 project was announced in May 2017 and promoted to public, independent and Catholic schools. More than 7,500 students from over 200 schools have registered to take part, with students asked to portray in art and words what it means to be 10 years old and living in WA.

Students will be undertaking their We Are 10 activity in August 2017 and their artworks will be displayed in locations across the state in December.

Children’s Week is a national celebration of children’s rights, talents and citizenship, which is celebrated in Australia around Universal Children's Day in October.

The Commissioner takes part in community celebrations during this week and also hosts initiatives to highlight issues relating to children and young people and their wellbeing.

In 2016 the Commissioner hosted a seminar for parents, involving the 2016−17 Thinker in Residence Professor Jane Burns, on supporting children and young people to develop the skills and understanding to safely navigate their online environments.

This seminar also included a presentation from Professor Donna Cross from Telethon Kids Institute, who has undertaken world-leading research on bullying and safe online practices for young people, and two young people, Jeremy and Jizelle, who are Cyber Savvy Ambassadors at their southern suburbs school.

The Commissioner has sponsored the Participate Award, part of the WA Youth Awards program, since 2010.

The Award recognises a young person aged 12 to 17 years who has shown outstanding dedication to make a positive change in their community, and who has inspired other young people to get involved.

Brianne Yarran was the 2016 recipient of the Commissioner for Children and Young People Participate Award. At the time of her win, Brianne was a Year 12 student at Hampton Senior High School, and part of the Follow the Dream: Partnerships for Success program. She demonstrates incredible passion, strength and influence as an outstanding role model for both Aboriginal and non-Aboriginal Australians, and continues to smash negative stereotypes surrounding Aboriginal young people.

Brianne and other Participate Award finalists met with the Commissioner to speak about their work in the community and issues affecting children and young people.

The annual Local Government Report Card Project Awards are sponsored by the Public Health Advocacy Institute of WA, Healthway and the WA Local Government Association with the aim of promoting and celebrating local governments that demonstrate outstanding commitment to building and maintaining environments that support the health of children and young people.

Sponsorship of the Children’s Consultation award enables the Commissioner to recognise and promote high-quality consultation activities involving children and young people, and the benefits these create for children, young people and communities.

The City of Cockburn also received a commendation for the wide range of ways in which they have consulted with children at school and in libraries as well as setting up a Children’s Reference Group.

Home Is Where My Heart Is

The Home Is Where My Heart Is program was established in 2008 and has been supported by the Commissioner for Children and Young People since 2011.

The program, coordinated by the Youth Affairs Council of Western Australia, provides young people who have experienced homelessness with an opportunity to express themselves and have their views heard in the community via a public photographic exhibition.

In 2016, the exhibition was held at the State Library in the Perth Cultural Centre. As part of his support for the program, the Commissioner hosted a morning tea to speak to participating young people about their experiences and views on homelessness.

The photographs and views of previous young participants from this annual program are on display in the Commissioner’s office.

“I think it is good when people like you come out and ask us what we think because then they know the real truth. So they don’t just guess and there’s things they can work on so things can get better.”

The Commissioner’s two 2017 advisory committees were appointed to support the office’s focus on promoting innovation in mental health service delivery, a key recommendation of the office’s 2015 report Our Children Can’t Wait.

In a change from previous years, the two advisory committees comprised students from a number of schools in both Geraldton and north metro Perth who were motivated to want to make things better for local young people, especially to help young people be mentally healthy.

The committees commenced their work by meeting with the Commissioner, then with the 2016−17 Thinker in Residence, Professor Jane Burns, to discuss ways social media and technology can be used to improve mental health services for young people, and how young people can have a say in how services are designed.

With the support of the Commissioner’s staff, committee members then surveyed their peers to better understand the priority mental health issues for young people in their local communities, and what stops young people from accessing support or help.

The Geraldton committee consulted 90 local young people and found that the biggest mental health issues in their community were depression, self-harm or suicide, problems in the community (such as alcohol, drugs and fighting), bullying and discrimination/body image issues.

They found that the top barriers to young people accessing help or support were being worried that people won’t understand them or take them seriously, not knowing who to talk to or where to go to get help or information, being embarrassed or worried about being judged.

The North Metro committee sought the views of 60 of their peers and found the biggest issues to be depression, coping with stress (including issues with school or study and issues with families), problems in the community (such as
alcohol, drugs and fighting) and bullying and discrimination.

They also found that the barriers young people experience in accessing help or support mirrored those raised by young people in Geraldton. This information was used to do an environmental scan on what resources are already available for young people.

In the second half of 2017 Advisory Committee members will generate ideas for social media or technology-based initiatives that could support young people in the areas they identified, and how these systems could look and work in their local communities.