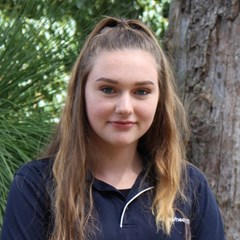 In my community I’m most proud of the fact it’s a clean, litter-free place more so than other areas and is very cross-cultural. The amount of crime, theft, bullying, public alcohol and drug use in the community does concern me and also the fact that there are not enough things to do for kids/teenagers after school or on weekends.

After high school I want to work toward becoming a registered nurse so that I can still be involved in the community and really just help people. I was first inspired to choose this career path because I had seen videos on social media of nurses and their patients together which I loved and also my mum and dad because they really believed it would be a great career for me. I received the humanitarian award at my Year 7 graduation so my teachers believed I can do it and help people.

Someone with good leadership looks like a well-respected person in society/school environment who cares about everyone and the issues going on. They want to make a difference and help wherever and whenever they can.

I want to make a difference and help everyone. Make changes to society and environments to help solve issues and help make everything in the community reach its potential and all up just a better place.

My leadership story is when I was in primary school and I was a student councillor in Year 7. Along with a small number of Year 7’s we tried to make the school environment a better and more fun place for everyone. We went on a leadership camp and did lots of activities to improve our leadership skills and boost our confidence. During lunchtime at school one day that really demonstrated my role as a student representative was when I saw my younger brother being bullied. I approached them and told my brother to come with me and told the bully that what he was saying was hurtful and wrong and I also said very calmly that I was going to report him to a teacher so he can deal with his consequences. Bullying is not a good thing and will not be tolerated! The bully apologised to the teacher I notified and my brother and when I asked him if he had heard of the bully lately he said he hadn’t and that he had left him alone.

My advice to young people is to be confident and stand up for what you believe in. It only starts with one person wanting to help and make a difference to make others want to stand with you and help too. You never know, if you want to do something and help make a difference there could be someone else who wants the same and all it takes is for one person to help give others the confidence and do the same.

I did a mature aged apprenticeship in Bridgetown district depot which is primarily a maintenance depot with fault priority mobilisation. My role previously was primarily that of an apprentice, but I also did pole deliveries (as I had a semi-trailer licence), de-energised pole and infrastructure replacements and, later on, operating the crane with a live HV crew doing energised pole and apparatus changes (as I have my crane ticket). I have high and low voltage switching qualifications and regularly work on live LV (less than 1000 volts). I'm currently second in charge of my faults crew.

Why this line of work?

Why I do the work that I do is really because I like the challenge and the variety in the types of jobs, circumstances and location so I never know what to expect each day heading into the depot. Being able to put the power back on for people and feel like I've done my job to the best of my ability to help citizens in need, some in very bad weather conditions even having had their power out for days!

What inspired me to do the job that I do was my friends who believed I would make an excellent member to the line worker team after having seen my leadership and teamwork skills both inside and outside the workplace environment.

Some of the challenges I have had to overcome was definitely going away on training and the many hours working on faults away from my family in terrible weather conditions trying to put the power back on. Also some jealousy from disgruntled co-workers and transferring/moving to Perth meaning having to get used to a completely different environment, but getting past all that has put me in a great position now doing the job that I love.

Good leadership is being able to organise the job so that it runs smoothly and being able to do any part of the job or tasks that need to be done (someone who gets involved in the job and helps with the task at hand instead of ordering others to do everything). And the biggest thing is making sure your co-workers are happy and SAFE!

I believe my strength as a leader is that I'm confident and comfortable to be able to direct people and get the job done smoothly. I'm good at distinguishing faults/problems and helping my team fix it. Also delegating jobs to improve efficiency within the team both in general maintenance and fault scenarios. I will always listen to my crew. We're all good at what we do and we all have the odd moment where a single good idea can make the whole day just fall together. Sometimes leadership is simply picking the right idea for the job. I try to be as friendly and approachable as I can when giving tasks and running the job and also just in general so that if my co-workers need to ask me anything or something happened that needs fixing they know they can come and talk to me so we can fix it together.

I was involved in a major pole replacement project in Nannup, along with multiple crews from Bridgetown, Margaret River and Busselton. When we pulled the pole out of the ground, it tore a water pipe up with it. I sent a couple of the boys up trying to build a sort of dam to try and feed the water back on the road (there was a LOT of water) until most of the loose soil flushed away and the water cleared up enough that we could see the pipe. Then I got in there with a pair of vice grips, crimped off the broken ends of the pipe and rolled them back to try and stop the water. Once it stopped, I started making phone calls. The first was to the site coordinator. Then I rang Water Corp, the regional manager and the Western Power incident hotline. All the while, trying to continue with the pole change. We got the new pole in, and left a nice big hole beside the pole for the Water Corp boys to work in.

I got pulled aside by my manager the next day. He said he'd had a call from the site coordinator to say how impressed he was that I'd just taken it on and run with it, leaving him to keep dealing with the rest of the job. Which, I reckon, is pretty good feedback.

Yes, maths sucks a whole bunch, but get your head around it, however you can. I never thought I'd use Pythagoras to lay paving bricks, or algebra to not explode. Any young person who is interested in the work that I do just give it a go, it’s a fun job and as long as you are safe it’s not scary. We definitely need more young line workers in the organisation for sure.