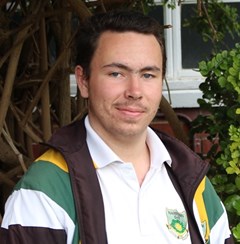 There’s not much to know about me, an average kid with few interests in life still trying to be a kid but I have found that it’s not better than moving forwards. Since coming to Narrogin I had very few reasons to be out and about with others my age but mostly because I lived out of town for the first couple of years. Within Narrogin the kids they were amazing but I kind of feared that not knowing if I belonged, but they welcomed me not as an outsider but as someone that’s a part of the community. I’m concerned that as the years roll by I see less and less of this hospitality that I had been treated with on other newcomers to the town. This I fear is turning the clock around for the town so instead of being known as the friendliest in the state we may end up the worst place to visit, and I would rather not see a fine establishment be turned into this.

After school I had two choices I wanted to do either become a game designer to bring the essence of what a child seeks after within their video games into the games or an aged care worker after my mother so that I can help people like she does and make a difference with either opportunity. I chose these paths as both are in my eyes a way to help not only the youth but those that are aged to the point of requiring assistance. By doing this I can say to myself that I had helped to make a difference in life instead of always cowering from large decisions I did not understand.

To me a good leader knows when to get involved when a problem arises between two or more groups, and when they must allow time for a person to understand what they had done and come forward willingly asking for help. With this said I fear I am not a good leader but I feel as though I can be a leader that isn’t quite perfect but still get the job done as I know when I need to listen instead of providing a solution that does not, in the end, help anyone. Although sometimes it is tough to know when to stop listening and act upon the problem at hand as I have had to over come most of the time instead of sitting back and being a bystander to a problem I can assist in.

For me, becoming a leader was tough as I had always been an odd one, but I never stopped thinking that I could be doing something better, such as helping others. This though posed another problem as to help others I would need to stop seeking comfort in being by myself as most kids can honestly say they did too. It wasn’t my thinking that I couldn’t do it that hindered me it was my solitude as it had driven me away from the warmth of others, but I kept trying to break free from this repetitive cycle as I knew to do great things I could not do them alone.

This blockage turned out to be what helped me through becoming a leader as others could not bear to see me alone and so they in their own way saved me from myself by showing me what I had pushed myself away from. By Year 7 I had mostly overcome this as most great leaders had overcome their own blockades and from that kindness I tried to show others the same. Although at first it was difficult knowing some people would not accept kindness because of their own personal loss or differences but I began to understand that and realised that to have suffered as others will you are then able to understand not only what they are going through but how they inevitably feel on the matter.

Any advice I could give to other young people is that no matter what there is always hope for you to be better than what you were before, and I say this as I know that it gets better as looking back on my life things were worse than what they are now, and for that I am grateful knowing there was hope for a better and even brighter future ahead of me. The best words of encouragement I received were from my mother as she says often “no matter what any one says you are perfect just being yourself”, and this couldn’t be truer since by being something you’re not only reminds you of the sadness in your life but by being you there is no end to the joy you can feel only by knowing you do matter.

Advice to other leaders

For me cross-cultural solutions mean a way to make people understand each other’s heritage and what they feel what makes each culture unique. Any advice I share on Aboriginal leadership and cross-cultural solutions would help some, but others would find intangible. Each person has their own opinions and thoughts on matters which is fine so long as they make sure to be heard, is the only advice I could give that would benefit all that read this. These matters are important as they are what will drive our great country into the future but cannot be achieved unless everyone is able to share what they believe would help to ensure not only each other’s safety but support their community’s. The benefits of doing this allows our future generations to remember what we had done to help make them proud to part of this great country.