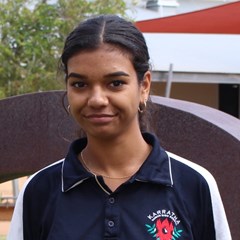 I was born in Perth and grew up in Karratha.

I am originally from up north in the Kimberley in a town called Kununurra.

I am also in a modelling agency and have done a program called Pilbara Girl. Pilbara Girl is about helping young ingenious girls to become good role models within the community.

I have had a job since Year 8 and am currently still working, since then I have gotten an Aboriginal School Based traineeship at ANZ bank. At the bank I work as a teller and serve customers. I work there every Thursday instead of going to TAFE like the other students in my year.

In the future I hope to go to university and study to further my education. I would someday like to graduate and get a house of my own.