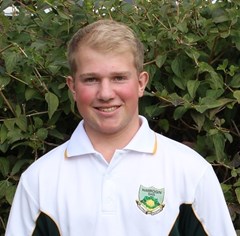 The thing that I am proudest of in my community is the attitude towards sport which brings much of our community together in an active and friendly way that reduces stress and promotes good exercise.

After I finish high school I hope to go to university to study how to become a teacher, at the moment probably in primary schools. I have been inspired to choose this pathway because of many things. One is the teachers in my family, such as my aunty, another is some of the inspirational and influential teachers I have had and still have through my primary and secondary schooling and the last is my desire to help others be the best that they can be. I also believe that having a strong education is a firm basis that can set you up for life. I believe that good leadership requires honesty, teamwork, organisation, respect, self-awareness and interpersonal skills. I believe that some of my strengths as a leader are my interpersonal skills, respect for others and honesty.

A story that I believe demonstrates my leadership is when I went on a three-month exchange to Italy. I went to Italy in October 2015 while I was I year 9 and left in January, 2016. During this period, I had to learn how to survive, with the help of the host family and the organisation, in a foreign country with my limited knowledge of the Italian language. During the three months I attended school and attempted to take part in the community as if I had been born there.

One of the pivotal moments during this exchange that defined my leadership journey was when the organisation organised a trip to Venice for other Australian exchange students and myself. On the last day of this trip we had to navigate around the city of Venice with only the help of ourselves and our exchange friends. We managed to do this, order lunch for 6 people in Italian, browse through Italian shops and return to meet with the organisation on time. To do this we had to work together and work out where we had to meet and what time we had to start to return to the rendezvous point. This requires a high level of teamwork and organisation as well as respect for one another.

If I could give some advice to other high school students about leadership I would advise them to do what they want to do and if they see an issue or problem, then to bring it forward so that it might be resolved or alleviated. I would also advise other high school students to respect others and listen to everyone’s ideas. Some of the best words of encouragement I have ever received was from my year 8 English teacher, Mrs Joan Armstrong, when she told me that I could attain an A in English when at the time I had thought my best would be a low B. This highlights to me the importance of support and self-belief because by the end of the year I had attained the A grade that she knew I was capable of.

Mr Steven Fawcett, before his current position as an Educational Assistant, was an Operations Manager at Red Dot where he oversaw 13 different stores. He then moved into the education field when his then step-daughter was having issues with her teacher. Because of this Mr Fawcett volunteered in the class to help his then step-daughter's education. He was then requested to undergo the training required for an Educational Assistant and he has maintained that position ever since. Mr Fawcett then moved to Narrogin and spent one year at East Narrogin Primary School where he assisted from Kindy up to year seven. After this, in 2007, he transitioned to Narrogin Senior High where he has been ever since.

Mr Fawcett enjoys seeing other students achieve and do the best that they can. He identified Mr Kris McDonald as being someone who inspires him and motivates him to continue his work as an Educational Assistant. Mr McDonald is a teacher of the Narrogin Senior High Health and Physical Education department.

Some of the challenges that Mr Fawcett faces in this role is when students that he is trying to help do not attempt or want to attempt tasks. Mr Fawcett stated that, in his belief, a good leader must listen, communicate, respect others and get the required job done. One person who embodies this is, in his opinion, Mr Andrew Corner, The head (HoLA) of Health and Physical Education at Narrogin Senior High School. Staff, parents and students have recognised Mr Fawcett as a role model and as a leader. Mr Fawcett believes that communication and listening are some of his strengths as a leader. I also personally believe that Mr Fawcett is a great leader because of his approachable nature, respectful attitude and infinite patience.

Together Mr Fawcett and myself decided that two of the stories that he thought of both defined and demonstrated his leadership and the journey that he underwent to become the leader that he is. The first story I have already mentioned in the first paragraph. This event caused him to step forward and starting with his then step-daughter, improve the education of everyone he meets and works with.

The other is very recent, in fact it only happened a few weeks ago but it has happened every year since Mr Fawcett became the boys’ soccer coach for Country Week. Mr Fawcett has in my three years of Country Week, as well as before based on the esteem past players hold him in, managed something spectacular. Mr Fawcett in the lead up to and during Country Week manages to put together a team of boys and prepare them to play soccer. Mr Fawcett does more than teach us the skills we need to play soccer, he teaches how to play as a team, how to play for each other and how to act in life. This year, 2018, highlights how playing as a team is just as important as skill as we won D division soccer. It is our team’s belief that one of the fundamental reasons for this victory was due to the teamwork and motivation that we maintained throughout the week and it was Mr Fawcett who imparted these values and beliefs to us.

He is in every way a role model, both to the boys he coaches and to those who he consistently teaches and helps at school. Mr Fawcett has taught me and many others the ways to go through life and to always respect others regardless of any differences that they may have. He is, in my belief, a remarkable role model and an amazing leader.

Mr Fawcett’s advice to others wanting to follow his career path is that you must celebrate differences, respect others, be responsible, be caring, communicate and listen as well as get along with your colleagues and students. His advice to young leaders is to trust yourself, be considerate and lead by example. Mr Fawcett believes that one of the key issues of our community is school attendance. He believes that by getting more children to regularly attend school our community will improve. Mr Fawcett is of the belief that the best way to support young leaders is to support them in their endeavours, provide them opportunities to lead and to listen to them. He believed that the most fundamental attribute that Aboriginal and non-Aboriginal people need to work together better is respect.

It is my personal belief that Mr Fawcett is one of the greatest role models within our community and that he has greatly improved the lives of many people within Narrogin and other areas that he has lived.