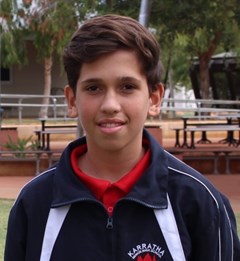 On the 11th of August 2002, I was born in a small hospital in a town in the Pilbara named Port Hedland. The town is located right next to the ocean and has a great beach and good overall scenery compared to its neighbouring town, South Hedland. Both my mother and father are Aboriginal Australians and we have a bit of British and German ancestry as well.

My mother’s name is Corrina. She was 20 when I was born and my dad, Guy, was 24 at the time. Although I was born in Port Hedland, I actually lived in South Hedland with both of my parents and my older brother, Keanu. Both my parents lived together in a house in the centre of South Hedland.

So there I was… An infant living with one older brother in a small house occupied by four people but meant for two, in the centre of South Hedland. My parents later found a better home on a different street. Even as an infant and toddler, my parents recall me developing quickly and being an independent little ratbag. While living in this house my younger two siblings were born.

I attended primary school as usual like any other kid with Keanu and my two younger siblings. Halfway through Year 4, when I was eight years old my parents separated. My dad moved out and I remained with my mother and three siblings. We continued to have a relationship with our dad, and although it was confusing, I didn’t let it affect my education.

I attended Cassia Primary in South Hedland. One thing I am very proud of during my primary schooling was my academic performance, but more so, my involvement in leadership roles. I became a student councillor in Year 6 and took pride in representing my peers. I also am particularly proud of being a role model for other Aboriginal students within the school, and did this by earning the Aboriginal Excellence Award upon graduation.

While living with my mother, she had a partner. He was a white guy in his late twenties. My mum had grown attached to him and enjoyed being around him. I didn’t mind him personally, however, over time he began taking and using more than he contributed to our family. This impacted my school life and that of my siblings; however, it didn’t stop me from doing my best. While other kids were dropped off at school, I walked, rain, hail or shine. While the other kids had lunch money and lunchboxes full of snacks, my siblings and I had to make do with an LCM bar each. Despite this, I loved school and was determined to succeed.

What makes my story more significant is that while trying to work towards graduating primary school, the most traumatising thing a child could ever experience happened to my family - my mother suddenly passed away.

The reason I believe I’m a leader is because although these traumatising events happened to me at a young age, I never once let it affect my educational pursuits. Even today, after having to move to Karratha with my dad and siblings and now living with my grandmother, I continue to strive for my best academic success and to be a leader amongst my Indigenous peers. I evidence this by participating in the Gumala Mirnuwarni Aboriginal Enrichment program, volunteering with the Clontarf Football Academy in the community and by aspiring to participate in ATAR studies in 2019.

Thank you for taking the time to read my leadership story, I hope in a few years’ time I’ll have even more to share with you.