The Year 6 students in the Sacred Heart Advisory Committee have an interest in the wellbeing of children, both at the school and in the community.

Coming from different family backgrounds and having a range of interests and talents, each committee member brings with them different ideas and perspectives. 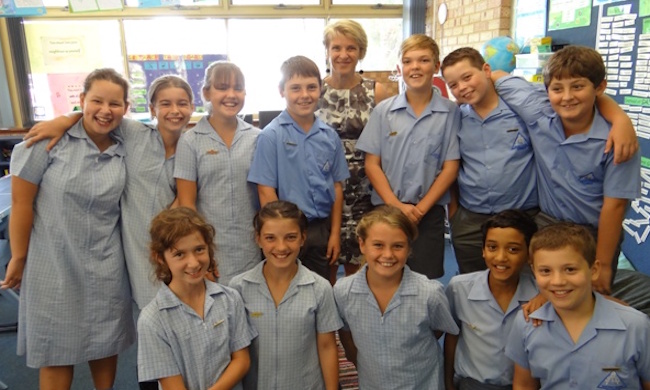 For their 'Us and Our Community' project, the Sacred Heart Advisory Committee worked with a number of other schools in the City of Gosnells to conduct a mini-consultation with their peers about their community.

The Commissioner attended the ‘premiere’ of ‘Can of Kids’ with students from Sacred Heart Primary School Advisory Committee.

The group talked to the Commissioner about their ‘discussion day’ and explained how they collated all the information and ideas from this event and created a short movie ‘Can of Kids’. It was a great way for the committee to present the thoughts and opinions of children in their community. The students told the Commissioner that the project enabled them to learn a lot about their local community including that most children feel pretty safe and happy, many children participate in various out of school sports and activities and that bullying is a big issue.

Students also discussed with the Commissioner how much they had enjoyed being part of her 2013 advisory committee. The panel script and video can be viewed below.

The National Children’s Commissioner Megan Mitchell met with the Sacred Heart Advisory Committee as part of her ‘Big Banter’ tour of Australia.

Students shared their ideas about a range of issues that mattered to them. Some of the things they discussed with the Commissioner were problems with online gaming, screening times for adult themed television shows and cyber bullying.

Advisory committee members will use all the ideas generated to finish their Us and Our Community project and report that they “made some new friends and had a great time”.

They also had some good ideas for promoting positive images of children and young people in the community. Members of the advisory committee shared some of their ideas for their Us and Our Community project with the Commissioner and were very enthusiastic about beginning their project in Term 2. Read the Sacred Heart Primary School media statement.

The Sacred Heart Advisory Committee was part of a group of nearly 50 students who provided feedback to the Public Sector Commission’s review of the Commissioner for Children and Young People Act 2006. Advisory committee members helped facilitate groups to lead discussion, generate ideas and make suggestions for improvement.