The School of Special Education Needs: Sensory Advisory Committee was a group of 16 high school students from across the Perth metropolitan region who are deaf, deafblind, hard of hearing or have vision impairment. 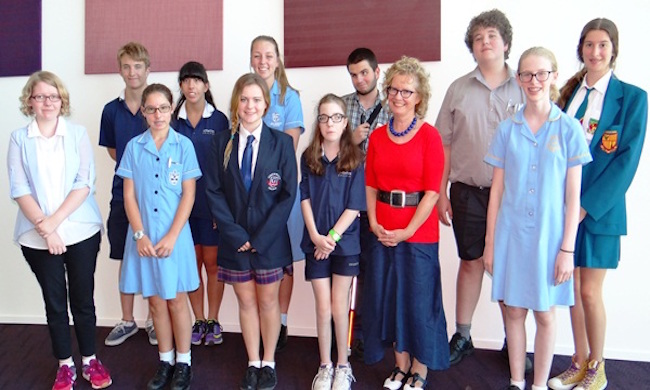 The students in the Sensory Youth Advisory Committee looked at the impact of social media on the health and well-being of young people with a sensory loss. In Western Australia, no previous research regarding social media had been done with this specific group.

A survey was compiled and forwarded to all high school children in Western Australia who have vision or hearing loss. The results of this survey were collated and presented to the Commissioner at the end of the year. This presentation took into consideration the communication and sensory needs of the participants, with key information being made available in braille, large print, subtitled and signed using an Auslan interpreter.

The survey results were captured in two ways, via an 'Us and Our Community' film and in a report on the research findings (alternative formats are available by request).

Report of the research findings

Co-Chairperson Vanessa was named 2016 WA Young Person of the Year, read more about her achievements in this article.

Co-Chairperson Harry speaks about his life and participating in the Advisory Committee in this Disability Services Commission video.

November 2015 – Report presentation to the Commissioner

On 20 November the Advisory Committee presented the Commissioner with their final project at their presentation day event held at the headquarters of VisAbility in Victoria Park. Senior stakeholders from a variety of organisations, the Commissioner’s office and the Department of Education, plus some parents attended.

At the end of the event the Commissioner Colin Pettit presented the sixteen committee members with Certificates of Appreciation for their hard work in compiling the report that collated young people’s views about social media.

The Committee met to discuss and collate the responses they received to their survey, which was released earlier in the August The final report, which will incorporate the survey’s findings, will be presented to the Commissioner in late November.

The Committee finalised the task of creating their survey. The online survey was translated into Auslan, meaning those students who use Auslan would have easy access to the survey via an online video. Permission slips to allow students to participate were posted to parents and guardians and the Committee waited for them to be returned before they sent out the survey.

The Committee were asked to give their feedback on several pages of the Commissioner’s website. The members commented on what they liked and made suggestions for improvements to the pages, as well as tested its compatibility with screen-reading devices. These insights will be fed into work to improve the accessibility and useability of the website.

For the first phase of their project, the Committee created a survey to be forwarded to all high school children in Western Australia who have vision or hearing loss. The online questionnaire asked them about their thoughts on social media. To enable the Committee to receive robust answers to the questions they want to ask, it invited the Department of Education’s Principal Evaluation Officer Bev Vickers to attend one of their meetings.

The students presented Bev with their survey questions and she was able to advise them on important research principles to help them finalise the survey.

A webpage has been created by the School of Special Education Needs: Sensory tracking the achievements of the committee.

The Committee met regularly and have progressed on their ‘Us and Our Community’ project. The dynamics of the group’s communication was unique given the variety of sensory impairments experienced by its members. The Committee interacted smoothly through the support of a variety of technologies and people.

During the course of a meeting, some young people communicated through the support of Auslan interpreters, while others used a variety of tools to access written information. Screen readers read words aloud from a computer screen, and an electronic braille display converted words from a computer into braille so it could be read. Hard copy braille and large print text documents were also made available at the meetings.

A group of 15 students involved in the 2015 Advisory Group met with the Acting Commissioner Jenni Perkins for the first time to outline their 'Us and Our Community' project.

During the session students spoke about how they will gather information and present the findings in regards to the impact of social media on children and young people and, more specifically, on the health and wellbeing of young people with a sensory loss.

The Commissioner was impressed with the enthusiasm of the students and their constructive recommendations.