Y2Y is a youth development and peer support program for children of parents with a mental illness.

The purpose of the program is to reduce the experience of stigma for young people as they move through adolescence and broaden their personal and social relationships.

Members of the group meet with other children of parents with mental illness and participate in meetings, activities, camps and events. 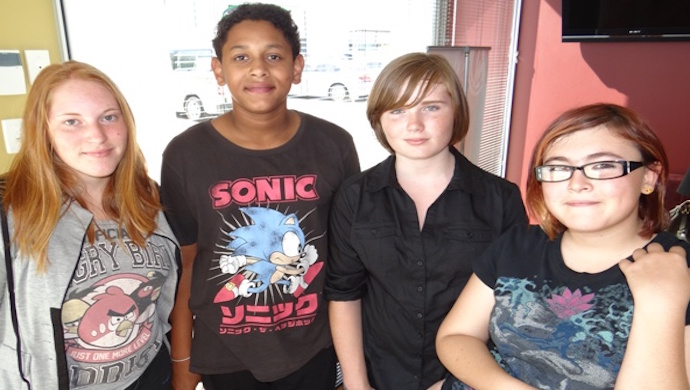 For their ‘Us and Our Community’ project, the Y2Y Advisory Committee produced a video that aims to de-stigmatise mental illness so that children of parents with mental illness can speak openly about their experiences.

The Commissioner met with members of her Y2Y advisory committee and watched their moving and powerful video that puts a human face to the issue of mental illness within families. Every aspect of the video, the script, acting, filming and production, was completed by young people who are involved with Y2Y – an incredible achievement.

The members of Y2Y at the meeting, Jeremy, Alix and Bethany, along with Wanslea staff member Lucy Green, discussed the video and what the process and the final product means to them and other members of their group. The Commissioner said the meeting with Y2Y was a wonderful and powerful reminder of the incredible insight children and young people can provide on important issues affecting our community.

National Children’s Commissioner Megan Mitchell met members of the Y2Y Advisory Committee on her ‘Big Banter’ tour of Australia. The young people, along with representatives from CREATE – the peak body for children and young people in out-of-home care – shared with the national commissioner their views on a range of issues  including access to healthcare, bullying, cyber safety, alcohol and other drugs.

They also discussed the significant role of parents and in particular how important it is, at times, for parent to say ‘no’ to their children.

Members of the Y2Y Advisory Committee provided feedback to the Public Sector Commission’s review of the Commissioner for Children and Young People Act 2006 and made suggestions for improvement.

Three of Y2Y’s Youth Ambassadors visited and spoke with the Commissioner’s staff about their work to support children of parents with mental illness and de-stigmatise mental illness in the community.

The Commissioner met with the Y2Y Advisory Committee as they kicked off their activities for the year. The first organised event for 2013 involved visiting Moore River and spending the evening horse riding and providing an opportunity for young people to get together and socialise. Read the Y2Y media statement.