It's a dog's life for Freya

When Freya Thompson says goodbye to her beloved dogs she almost hopes she won’t see them again.

Freya, 16, a student at Newman College, is a volunteer at the Dogs’ Refuge Home in Shenton Park so each dog that disappears from the inmates’ list is actually a success story – a re-homed dog that has found a family.

“At first I used to come home each week and say to Mum and Dad ‘this is the one! We’ve got to adopt him’ and I’d be sad if a dog had moved on,” she said.

“Now I realise that not only could I not take all those dogs home, but they are probably better off being matched up with their ‘special person’.

“The Home is a no-kill shelter, which means that the dogs will stay there for as long as it takes to find them a loving home,” said Freya. 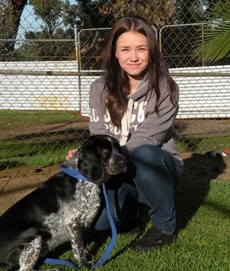 Her tasks at the Dogs’ Refuge are varied and can include making beds for the dogs, preparing meals and washing their dishes and, of course, spending time with them.

“I work on their kennel presentation. That’s when you help the dogs to show off their best side – to come up to the fence and greet people, then sit nicely while potential adopters get to know them. It’s a really important part of the process of re-homing,” said Freya.

“Often I just go in to their run and sit with them.

“Some of the dogs haven’t had much affection when they come to us and of course, it can be very boring for them shut in most of the day.”

Freya said any affection that was given to the dogs was repaid tenfold. “It’s amazing, they just crave a kind word or a hug. It gives you such a good feeling to know that you are making their day better.”

Freya said that she also enjoyed the human company at the Dogs’ Refuge.

“I was a bit nervous at first about what it would be like, but everyone is so kind and patient, you never feel silly for asking questions or getting help with things. It’s a great environment to learn in.”

Freya has always known she will end up working with animals, so her time as a volunteer is helping her achieve that goal.

“I want to become a vet nurse. I’m not sure exactly where I’ll end up in animal care, but this has given me a great opportunity to work with lots of different dogs and to share their happiness at finding homes,” she said.