Tyson dreams of voice for all

As Tyson McEwan stood at the speaker’s podium in Parliament House about to outline his plan for increasing the effectiveness of the democratic process in Australia, he mentally ran through the key points of his argument. And wondered what the food would be like at the Government House afternoon tea.

As a 16 year-old elite water polo player and footballer, keeping the body fuelled to maintain his hectic schedule can be a challenge.

Tyson was in Canberra as the youngest WA representative in the inaugural National Indigenous Youth Parliament and said the trip strengthened his political ambitions. And that he was well fed at Government House, where he rubbed shoulders with a range of dignitaries.

“The whole trip was an amazing experience and I was honoured to be chosen. We had such a great time and learned so much, with challenging surprises being presented to us each day,” said Tyson.

Six representatives from each state and territory were chosen for the week-long experience that combined theory with practice as the “parties” developed and presented their respective bills in Parliament.

“I was pretty nervous at first because I didn’t really know anyone, but we did icebreakers on the first night, and after that the whole group really bonded," said Tyson.

“Each night we had a yarning circle where we’d talk about how the day had gone, but also, as the week went on, everyone started to open up more and there was a deep trust and feeling of togetherness.” 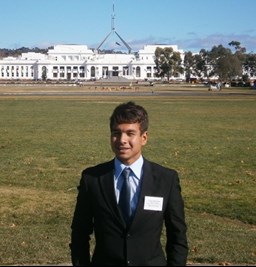 After practising his debate in Parliament House, Tyson was chosen to meet Opposition Leader Tony Abbott for morning tea before the whole group headed off for a tour of Old Parliament House.

“It’s hard to describe the feeling that we got there, but you could really sense the history and all the things that had taken placed in those corridors over the years," he said.

“Each night we had guest speakers who deepened our understanding of the political process. I really enjoyed listening to the Commissioner of the Australian Electoral Commission, because my dream is to increase the Aboriginal voting population.

“I think it’s such an important issue and everyone should be part of the democratic process. There’s a huge gap between the Aboriginal and non-Aboriginal voting numbers and we need a more active education campaign. Even a one per cent increase in the numbers who vote would be great. It’s the only way for people to be heard and to have a fairer society. People say, ‘but I’m just one person’, but you still should vote, every one counts.”

During the day the young parliamentarians worked on their bill and sat in on the federal Parliament.

“We were taught the rules that the politicians had to follow and it was pretty amusing watching how close they go to breaking them when they get stuck into each other," said Tyson.

“The next time we went into the chamber to practise, our teachers were horrified that we started copying what we’d seen in Question Time!”

Other activities included a lunch with all the MPs in the new Parliament House and a visit to the Aboriginal Tent Embassy.

“We went to the Tent Embassy for the opening of Reconciliation Week and that was amazing,” said Tyson. “It was definitely the best trip I’ve ever been on and having that kind of recognition or award for things you do really motivates you to keep going and try harder."