Torekana Bule-Turner, 12, from South Hedland was announced as the 2012 Participate Award winner.

Torekana uses dance and martial arts to inspire at-risk children and youth in the Pilbara town of Hedland. 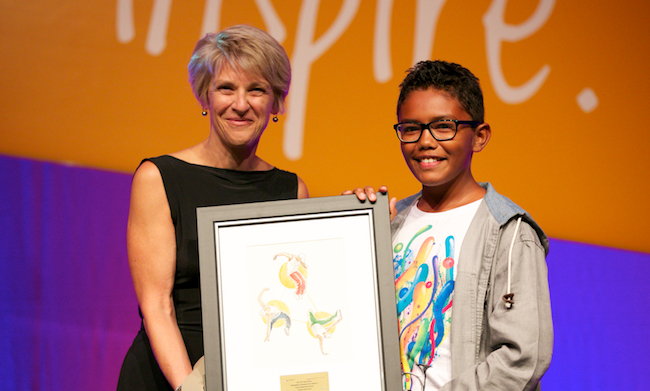 A humble but ambitious young man who takes leadership seriously and with humility, Torekana aspires to one day be the prime minister of Australia.

As the youth leader of The Hood, an innovative youth led project, Torekana uses the genre of hip hop to make a positive impact on local young people.

The Hood runs a weekly program called Hip Hop Don't Stop which attracts about 40 young people, mostly local Aboriginal children who cannot access or afford dance schools or sport memberships. Many boys show a surge in confidence and an interest in other community activities after participating in the hip hop program.

As well as being a role model for young boys, Torekana's leadership has benefited young Aboriginal girls between the ages of 10 and 12 years. His gentle approach to leading the class and teaching his own choreography has encouraged this group to develop their own distinctive style on the dance floor.

Torekana is a black belt instructor for taekwondo and teaches junior classes in a club with more than 70 members. Torekana has a commitment to social justice and community action as well as being a gifted artist and talented athlete.

Sayah has a desire to help others and a commitment to community service.

Sayah has been a volunteer in the Porongurups area for activities such as the Art in the Park Sculptural Exhibition, the Porongurup Fire Brigade, Kaos Theatre productions, various fundraising events and the Friends of the Porongurups Group environmental mapping project. Sayah hopes to continue her interest in the environment through university study.

Sayah is a positive role model and mentor for other young people and demonstrates that it is possible to be active in community life while still achieving excellent academic results.

Despite spending more than three months in Princess Margaret Hospital after accidents as a 12 year old, Jayden maintained his commitment to his education and has been an outstanding student since entering Year 8 at Coodanup Community College. Jayden hopes to study dentistry at university. His commitment to education is fuelled by his ambition to be a role model for his siblings and fellow students.

Jayden is a participant in local youth programs and has been acknowledged as a leader and positive role model for his peers.

His leadership was recognised last year when he was selected to represent his school at the YMCA Youth Parliament in Perth. Jayden relished his role as Leader of the House for the Legislative Council and used the opportunity to provide a voice for the many other Aboriginal students at his school.

Jayden is the nominated representative for the Aboriginal community at his school and in this role mentors students, represents Aboriginal young people on the student council and introduces local elders at school events.

In 2012 Jayden received the Premier's Australia Day Active Citizenship Award (Under 25) in Mandurah as a result of his positive impact on community perception of youth and Aboriginal people.

Emma is a passionate advocate for sustainable living, the environment, and awareness of the issues affecting regional young people.

In July 2011 Emma represented the Blackwood-Stirling region at the YMCA Youth Parliament in Perth. Her portfolio was education and she lobbied for increased resources to be allocated to regional District High Schools. She argued that if regional schools were more attractive to metropolitan teachers, the long-term benefit would be an improvement in academic standards outside the Perth region. As someone who spends about three hours a day on her 140 km round trip to high school, Emma understands the challenges facing regional students.

She is also passionate about community arts. She has been involved in the organisation of local photographic exhibitions and played the cello with the Western Australian South West Youth Strings Orchestra.

Late last year Emma travelled to Cambodia with her schoolmates to build houses for Cambodian families.

Emma is a volunteer journalist and photographer for the Donnybrook Bridgetown Mail and the Nannup Telegraph and hopes to launch a student newspaper this year because she believes it will strengthen communication and an appreciation of young passions, opinions and creativity.

Emma was awarded the 2012 Premier's Australia Day Active Citizenship Award (Under 25) in the Shire of Nannup in recognition of her community work and as a role model for young people.