Paulo Velho was announced as the 2013 winner of the Commissioner for Children and Young People Participate! Award. 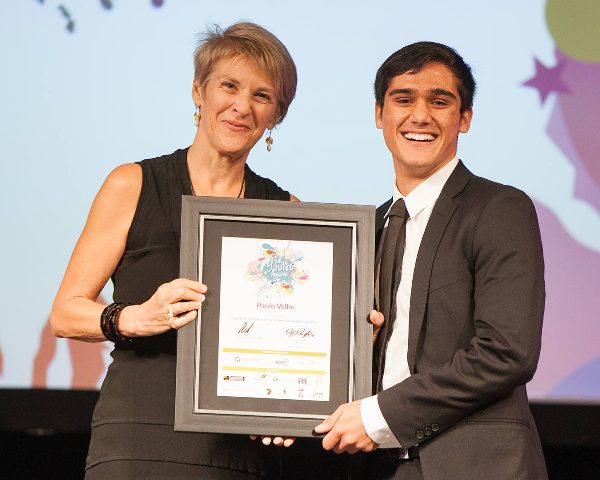 Paulo participated in a program to help people with a disability to surf and also helped coordinate Music Feedback - a program designed to encourage young people to talk about their mental health.

Last year, Paulo worked to raise enough money to go to the Phillipines on a 14 day immersion program where he visited the poorest parts of Manila, working with deaf students and learning about the local culture. At just 17 years of age, Paulo has a social awareness and compassion that belies his age - he believes that everyone has a role to play in fostering a stronger community and that his own contributions have the potential to engage other people to the same end.

Paulo lives in Mt Pleasant and is completing his Year 12 studies this year, as College Captain of Aquinas College.

Heather Barrett began running Salvation Army Appeals at her school two years ago, spending time before and after school and during lunch to organise the appeals and encouraging other students to assist. She is working hard to strengthen the bond between her school community and the Salvation Army, which will be sustainable even after she graduates. Heather is a member of the Rockingham Youth Advisory Council and assisted with the planning of the 2011 YOUth Fest. She became secretary of the Council in 2012.

Elected as a Student Councillor in 2012, Heather has mentored junior students and coordinated a sustainability committee to help implement lasting changes within her school, including the development of a vegetable garden, a functional worm farm and the installation of recycling bins around the school.

Heather was named as Highly Commended in the Participate! category at the 2013 WA Youth Awards.

Rebecca is a Year 10 student at Kolbe Catholic College. She has been a member of the Rockingham Youth Advisory Council since 2010 and is a passionate youth advocate.

Over the past three years, she has helped coordinate the local YOUth Fest event and recently organised the Youth Jam Music Series over the 2013 summer to give upcoming young musicians an opportunity to perform in a supportive environment.

Rebecca also volunteers at Silver Chain Garage Sales, has been involved in Relay for Life and Save the Children charitable efforts, and has been elected as a student councillor at her school. She has proven herself to be a community minded, compassionate and generous young person who is a positive role model in her community.

Trevor Franklin is a caring and passionate young man who embraces his culture. Trevor is heavily involved in volunteer work in his community including volunteering with the City of Geraldton's 'Youth N Motion' bus and Midnight Basketball program. He has also been a valued volunteer for four years for the Geraldton Street Aboriginal Corporations' Night Outreach program which offers support to Aboriginal youths involved in underage drinking, fighting, anti-social and criminal behaviour.

Trevor has just graduated Year 12 and works part time at the Durack Institution of Technology at Batavia Coast Maritime Institute breeding fish and managing water quality. He won the Centacare Youth Volunteer of the Year for a person under 21 years in Geraldton and was also a finalist in the 2013 Premier's Australia Day awards for a person under the age of 26 in Geraldton.