Vincent Pettinicchio is the recipient of the 2017 Commissioner for Children and Young People Participate Award.

Vincent is a Year 7 student from Kallaroo on a mission to improve the quality of life of homeless people in Western Australia.

In February 2013, at just seven years of age, Vincent was bullied at school and inconsolable at home. To help Vincent with the situation, his mum told him to think of doing something nice for someone else.

In 2014 Vincent’s Project for the Homeless was born. In his first year, Vincent set his target at 300 packs and he exceeded that aim, delivering 364 packs to the Vinnies.

More than 1,000 packs were delivered to as far as Paraburdoo, as well as Northam, Perth, Northbridge, Fremantle, Guildford, Clarkson, Midland and Mirrabooka. 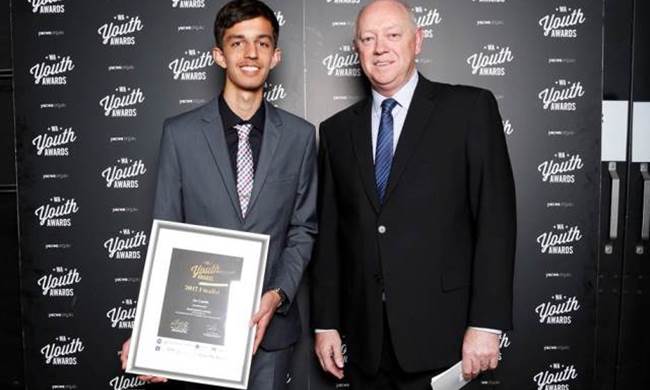 Allee is described as a remarkable young woman and a shining role model for other young people, not just within the Aboriginal community, but the entire Geraldton community.

She has been a youth consultant to the Geraldton Sporting Aboriginal Corporations programs and active in encouraging young Aboriginal girls to participate in basketball, soccer and cricket, including providing transport for those that need it.

She also plays, umpires and coaches basketball, soccer and cricket and is an accomplished sportsperson, recently representing Western Australia as an Indigenous Cricket team member.

Allee is also a member of the Geraldton Streetwork Aboriginal Corporation Youth group, convened to address youth needs and give local Aboriginal young people a voice.

Jai is a Year 12 student at Shenton College and possesses a CV that takes some reading!

He is the Head of Community on the Student Council at Shenton College; participated in the Fogarty Future Leaders Conference in 2016; captains, mentors and teaches Year 7 to 11 students in robotics and programming; participates in debating; and was involved in the United Nations Youth Voice Public Speaking Competition.

He is also an environmentalist. Jai has participated in environmental volunteering and planting days to maintain the bushland at Lake Claremont, and with the Swan Estuary Reserves Action Group to help maintain bushland at Pelican Point.

In 2015, Jai was one of three students chosen to be a part of a selection panel for the appointment of the Commissioner for Children and Young People.

Robert is described as a 12-year-old red-headed, caring, determined, resilient, amiable and fun loving young man from Kalgoorlie. He doesn’t hesitate to help out when he identifies an opportunity to assist others and has an amazing ability to inspire others while improving his local community.

He is an active volunteer and has collected blankets for those experiencing homelessness, collected stationary for school kids in Bali, conceptualised and established an ‘Adopt a Nanna’ program between the school and the local nursing home, and coordinated the delivery of around 70 ‘care packages’ to troops deployed overseas at Christmas.

He is also the 2017 Primary School Head Boy at Goldfields Baptist College, Kalgoorlie.

Get in touch with us.

Keep up to date.