Prioritising the needs of disadvantaged and vulnerable children and young people

Following media reports in late 2020, the Commissioner raised concerns with the Minister for Child Protection over placement decisions made for young people with harmful sexual behaviours living in residential care.

Based on these discussions the Commissioner undertook an independent review of Department of Communities' policies, practices and services regarding the placement of children with harmful sexual behaviours in residential care. A report on this work will be published outside of this reporting period.

As recommended by the Royal Commission into Institutional Responses to Child Sexual Abuse in 2017, the Commissioner continues to advocate for strong independent oversight of the child protection and out-of-home care system.

The Commissioner chairs the Pursuit of Excellence in Responding to Child Sexual Abuse in Western Australia Executive Steering Group, a consortium of leaders from relevant government agencies, the Australian Centre for Child Protection and other key stakeholders. The purpose of the Executive Steering Group is to provide strategic advice, oversight and governance for initiatives to enhance responses to child sexual abuse, including advice regarding the establishment of the WA Centre for Excellence in Responding to Child Abuse and Neglect.

The Commissioner recognises that Aboriginal people are best placed to identify, develop and manage solutions to meet their needs.

During the year the office worked with several Aboriginal communities on initiatives to support them to lead the planning, development and implementation of programs and services to provide better outcomes for their children and young people.

Working with the Wyndham Youth Aboriginal Corporation, the Commissioner helped develop and implement a change-maker training program focused on Aboriginal community research. With Ninti One, the office ran a three-day workshop on community research for young Aboriginal people, developing their skills in community-peer research and community consultation processes. The trained researchers conducted a consultation with local young people to inform youth service provision in the community and address youth unemployment, stability and mental health issues.

In Roebourne, the Commissioner supported the implementation of the change-maker model, now known as the Young Aboriginal Researchers in Community program, to train Aboriginal young people to assist in the planning for a new Roebourne District High School. The young Aboriginal researchers conducted a community-peer research process for the building of the new school.

A number of Aboriginal young people from Roebourne were also consulted on the resources the Commissioner developed for the National Office of Child Safety, which outline the steps children and young people can take to raise their concerns or make complaints within organisations. The young people shared their thoughts and ideas on the resources and one of their artworks was used to create a new poster for Aboriginal children and young people. The poster was produced by the Commissioner’s office and distributed to schools throughout WA during the Speaking Out Survey fieldwork.

To reach children and young people outside of mainstream education, including Aboriginal students in remote communities, the Commissioner’s Speaking Out Survey will be extended in the second half of 2021 with grant funding from Lotterywest.

A strategic, cross-government approach is essential to build the understanding of preventative and treatment approaches for harmful sexual behaviours of children and young people.

The Commissioner assisted the Australian and New Zealand Association for the Treatment of Sexual Abuse (ANZATSA) committee in securing support from government agencies for the inaugural ANZATSA symposium focused on harmful sexual behaviours in children and young people. The symposium was held in Perth in 2021 and featured Australian, New Zealand and international speakers who explored innovative responses and prevention initiatives to complex issues.

Advocating that governments and leaders fully support and implement the recommendations from the Royal Commission Final Report in 2017 continues to be a strong focus for the Commissioner. Much of the work of the office centres on areas directly relevant to several of the Royal Commission’s recommendations: child friendly complaints mechanisms, oversight of services for children and young people, harmful sexual behaviours in children and young people, advocacy and support, and child safe organisations.

The views of children and young people collected by the Commissioner’s office through consultations and the Speaking Out Survey demonstrate that their mental health is a serious issue.

The Commissioner continues to make representations and advocate for changes to the WA youth justice system to improve the opportunities and outcomes for young people in the system and their families.

The Commissioner visited Banksia Hill Detention Centre twice over the last year and a member of the team participated in the inspection by the Office of the Inspector of Custodial Services in 2020.  A Banksia Hill staff member worked at the Commissioner’s office on placement during the year developing an understanding of child safe organisations policies and practices and working on a resource for staff and volunteers.

The views of young people within Banksia Hill and in contact with the youth justice system in the Kimberley were incorporated into the Commissioner’s COVID-19 publications.

Young people in Banksia Hill also participated in consultations and provided feedback on the resources developed by the Commissioner for the National Office for Child Safety, which outline the steps children and young people can take to raise their concerns or make complaints within organisations.

In July 2020, the Commissioner published the Speaking out about autism report, which was submitted to the Senate Select Committee on Autism, along with recommendations to strengthen the rights of children and young people with autism within a National Autism Strategy.

Young people from the Youth Disability Advocacy Network worked with the Commissioner’s staff to provide feedback on the office’s Disability Access and Inclusion Plan and a staff member presented to YDAN’s Youth Taking Charge: Disability Summit 2020.

To further strengthen the Commissioner’s engagement with children and young people with disability, the Speaking Out Survey will be extended in the second half of 2021 with grant funding from Lotterywest to reach children outside of mainstream education, including students with special needs.

In August 2020, the Child poverty – A call to action report was released, which recommends a whole-of-government child wellbeing strategy for WA, with clear targets and measures to address socio-economic disadvantage and child poverty.

At a national level, the Commissioner continues to strongly advocate for the need to develop a Child Poverty Reduction Bill. Defining, outlining and agreeing on a means of measuring child poverty is critical and should guide the development of the Bill. This measure should incorporate the different aspects of poverty and deprivation, such as access to income, material basics, health, education, housing and food. This is being progressed with Commissioners and Guardians across Australia. 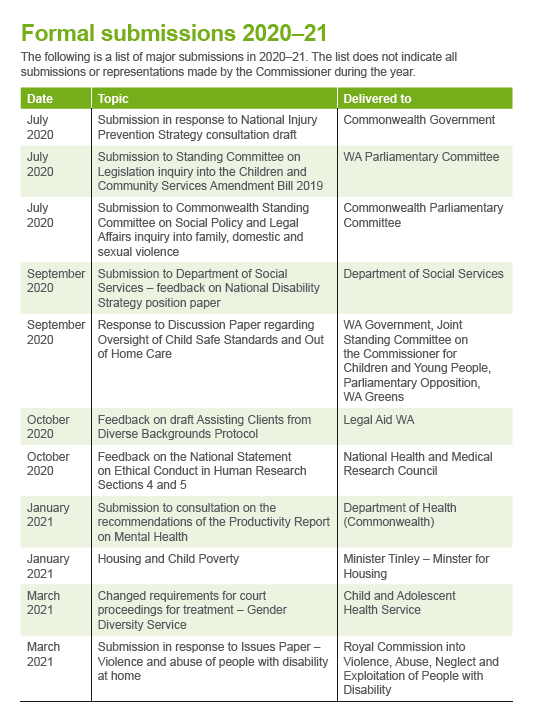