Tyson McEwan has shown outstanding leadership to other young people in the Geraldton community.

He is committed to encouraging and inspiring his peers to become involved in programs that promote positive life choices by showing them how important it is to be self motivated.  He is always looking for opportunities to help make the community a safe place for young people.

As an enthusiastic leader and volunteer at fundraising events and activities run by the Indigenous Youth Council (IYC), Tyson has contributed in many ways to his community. 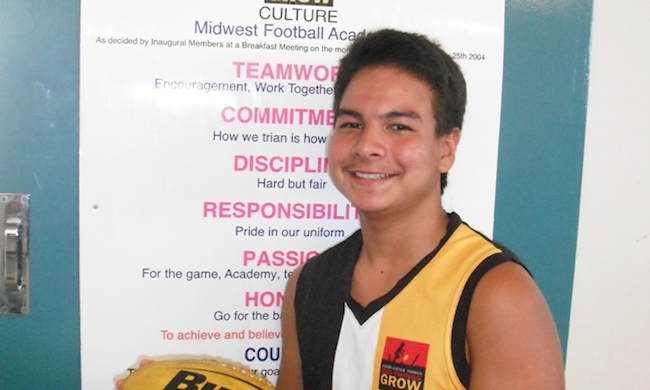 He has had first-hand experience of dealing with some of the problems young people encounter as they grow up. He willingly passes the skills and knowledge that he has learned as a member of the IYC onto other young people who are facing similar problems. Due to his dedication to the IYC, Tyson was elected Chairperson in 2009 and still holds that position.

Every school holidays for the past three years, Tyson has volunteered his time to work with young people participating in the Geraldton Streetwork Aboriginal Corporation –‘Streeties’ Holiday Program.

The Midwest Football Academy recently appointed Tyson to be the Year-9 ‘Leader and Role Model’.

He also contributed to the production of the Geraldton Regional Aboriginal Medical Service’s Youth Health Manual.

Tyson’s commitment to bettering the lives of the young people in his community was recently recognised when he won the Community category (year 8-9) of the Streeties/Bundiyarra Indigenous Youth Awards.

Tyson has a burning desire to show young people of all ages that they can achieve anything they put their minds to and is an inspirational mentor for young people who want to follow in his footsteps and make positive choices in life.

Savannah is known for being an active and dedicated community member both in her regional community of Lake Grace and her former home of Wyalkatchem.

Over the past few years, Savannah has taken a leading role in identifying and addressing the needs of young people living in small rural communities.

Through her involvement in the Wyalkatchem Children and Youth Group and the Wheatbelt Youth Leadership Development, Savannah has encouraged other young people to get involved, resulting in the creation of some great opportunities for the young people of Wyalkatchem.

One of these opportunities was the True Blue Dreaming youth mentoring program that Savannah enthusiastically participated in.

Savannah has also directed a Roadworx TV advertisement on road safety targeted at young people and is currently project manager for the production of a magazine showcasing achievements of young people in the Wheatbelt to be published later this year.

The community has benefited from Savannah’s activities in many ways. She has helped parents to attend P & C meetings by child minding in the school library, volunteered on summer weekends to provide musical entertainment at Goomalling swimming pool and organised youth events.

Savannah’s participation in the school’s emergency cadets proved to be useful when she was called on to assist a fellow student in a life threatening situation.  Savannah was awarded a certificate from FESA for first aid and commended for her quick and decisive action.

Not only has Savannah shown outstanding dedication and enthusiasm to making positive changes in both her past community of Wyalkatchem and in her new community of Lake Grace,  she has motivated many other young people to get involved.

Savannah’s dedication and commitment to getting involved in youth-focused projects has contributed to making the Wheatbelt a better place for young people to live.

As secretary of Ballajura Community College’s Amnesty Youth Club, Kim has given up many lunchtimes to coordinate a range of club projects and activities to raise funds for those less fortunate.

Examples of her tireless work include coordination of fundraising projects for victims of the 2009 Victorian bushfires and for Burmese students who were tragically affected by Cyclone Nargis. Through Kim’s efforts, Ballajura Community College is among the top 10 fundraising schools in Australia in a field of 300.

Kim has also been instrumental in promoting the campaign ‘Operation Christmas Child’ which, due to her sheer tenacity in engaging support and action from other students, has now become an annual fundraising event at her school.  As a result of Kim’s enthusiastic leadership many disadvantaged students receive a Christmas parcel.

Promotion of positive images of young people is high on Kim’s agenda. She is continually looking for opportunities to encourage young people to consider another point of view and seeks to get them involved in projects that promote cultural acceptance.

Kim’s commitment to promoting events such as Harmony Week and Refugee Week, have contributed significantly to creating a culture of acceptance of diversity and difference at her school.

Her contributions extend far beyond her school where she is head girl. Every year Kim is involved in the organisation of the Ballajura Rotary Fair. She uses the Amnesty pod at the Fair as an opportunity to promote human rights to other young people in the broader community.

One of Kim’s favourite slogans is “the youth care” which is reflected in her tireless community involvement both within the school environment and beyond.

It is difficult to quantify the impact of all of Kim’s work, but it is has certainly made an enormous difference to her school, her local community and the wider world.

Kim’s commitment to improving the lives of others is outstanding.

Robbie Williamson is a vocal, passionate advocate for human rights.

Robbie’s focus is on empowering young people to take leadership on local, national and global issues.  Through his work with Amnesty International and the United Nations Youth Association, he encourages young people to have a voice in important decisions.

Two basic aims underpin Robbie’s work: to encourage the wider participation of young people in political discussion and to show adult decision-makers that young people have legitimate and vital concerns about local, national and global issues.

The Shenton College community, where Robbie Williamson is a year-12 student, has benefited enormously from his energy, commitment and dedication. From the age of 14, Robbie became involved in the Shenton College Amnesty International group where he soon emerged as a natural leader.

Robbie has tackled serious global and local concerns – a good example of this is the campaign he managed relating to Fair Trade practices. Robbie surveyed the students and teachers who purchased coffee in the canteen to examine their commitment to purchasing Fair Trade coffee at an increased price and presented market research to the canteen in an effort to negotiate change. This work not only raised awareness about Fair Trade practices within the school community, but had more far-reaching consequences for workers on a global level.

His impressive skills as a political debater contributed to his appointment as a facilitator at the United Nations Youth Association state conferences in 2009 and 2010.

Robbie was selected to represent Australia in the Pacific Model United Nations this year.   Attending the Global Youth Leaders Conference in the USA later in the year will give him an opportunity to pursue his interest in politics at a global level.

Robbie’s ability to engage and encourage other young people to become involved citizens makes him a great asset to both Shenton College and the broader Western Australian community.