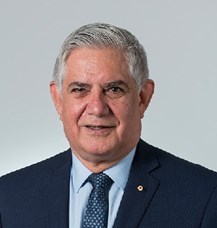 My name is Ken Wyatt AM and I am a proud Noongar, Yamatji and Wongi man and was elected in 2010 as the Federal Member for Hasluck, the first Aboriginal Member of the House of Representatives.

In 2015, I became the inaugural First Nations member of the Federal Executive after being sworn in as Assistant Minister for Health, and in January 2017, I became the first Aboriginal Minister to serve in a Federal Government, after being appointed Minister for Aged Care and Minister for Indigenous Health. My portfolio responsibilities also include Australian Hearing Services and organ and tissue donation, through the Organ and Tissue Authority.

Before entering politics I worked in the fields of health and education including as District Director for the Swan Education District, and Director of Aboriginal Health in New South Wales and Western Australia.

In 1996 I was awarded the Order of Australia in the Queen’s Birthday Honours list for my contribution to the wider community in training and mentoring young people. Later, in 2000, I was awarded a Centenary of Federation Medal for ‘efforts and contribution  to improving the quality of life for Aboriginal and Torres Strait Islander people and mainstream Australian society in education and health’.

Charles Perkins and Lowitja O’Donoghue have been exemplars for me. I have always been fascinated by people who become the person who leads a group. You take attributes of good people and you learn to use them in the way you operate and the way in which you make decisions, not just for yourself but for those you are responsible for.

As a Commonwealth Minister, my leadership role is a national position. However, I find that I operate on a Rotary Club ethos, and that is “service above self”. By making decisions on that principle, you will more often than not, make the right decision.

Leaders also need to understand that they will also make mistakes but you must accept that mistake, learn from it and turn it next time into a positive way forward. Leadership is about guiding, directing and taking people with you. It’s complex, yet it’s simple.

In our families, our father or our mother tends to be the leader and we tend to listen and follow. We aren’t always obedient, and we get punished, but generally the principles of leadership are being in a pivotal role where you can influence those around you and influence the future - showing tough love when it’s needed but, equally, being prepared to acknowledge that others’ ideas can be different to yours.

The key things you have to attain as a leader are:

Follow them through, though sometimes peer pressure is tough to deal with. Learn the art of listening. Listen carefully and also listen with your eyes. And then, step forward. Be prepared to acquire new knowledge, be prepared to embrace the understandings that will help you become a better leader in any sphere of work. That’s what I have done, through accepting my limitations, but knowing that I can step outside of them in order to be a pathfinder for reform and change.