The Katanning Leadership group comprises students from Years 8 to 12 who organise and participate in a number of school and community events.

Katanning Senior High School has a significant number of Aboriginal students and students from culturally and linguistically diverse backgrounds. 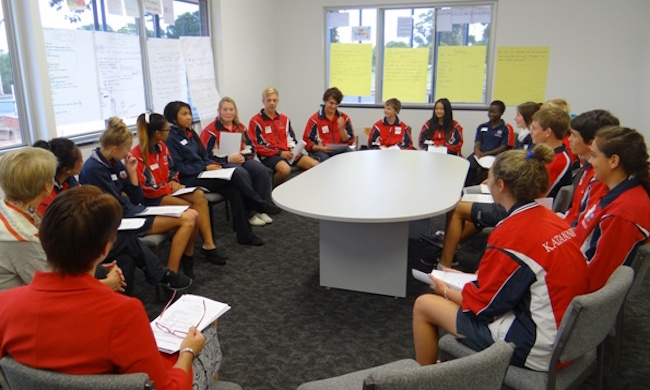 For their 'Us and Our Community' project, the Katanning Advisory Committee organised and held workshops with students at neighbouring schools which provided an opportunity for children and young people to talk about bullying.

Members of the Katanning Senior High School Leadership team spoke with the Commissioner this week and shared their experiences of organising and running three workshops designed to give young people an opportunity to talk about bullying. The sessions involved students at Wagin, Gnowangerup and Kojonup high schools.

The advisory committee reported that they found bullying to be a very important issue for many young people and they heard many stories and ideas about how to combat the problem. The Commissioner was impressed to hear about the various ways committee members dealt with some challenging situations they faced when delivering the bullying workshops.

Students were looking forward to their ‘Mini Get Up and Go Day’ that they were planning for later in term 4 which will involve students from three local schools travelling to Katanning Senior High School.  Through participation in a range of fun activities, students will learn more about resilience and in particular ways to support other students who may be bullied or feeling sad.

The Katanning Advisory Committee was part of a group of 24 students who provided feedback to the Public Sector Commission’s review of the Commissioner for Children and Young People Act 2006.