The North Albany Senior High School Advisory Committee is a group of 20 students from the student council and participants in the Rising Albany Yorgas (RAY) program.

The RAY program was developed by the school for Noongar girls to develop career pathway options, provide mentoring services and rewards for good attendance and behaviour at school.

The student council is made of students from years 7 to 12 who meet regularly to discuss issues and plan events within the school.

At the end of event, the Commissioner presented the Committee members with Certificates of Appreciation to acknowledge their contributions over the last 12 months.

The Committee has decided to do a creative project in Term 3 which will allow them to artistically portray their thoughts about what helps and prevents children and young people from enjoying their education, and also get other students from their school involved. A member of the Commissioner’s staff visited the students in Albany to brainstorm their ideas for the project. The group their focus would be on the importance of ‘student health and wellbeing’ as they felt this was essential to helping children and young people to enjoy school and learning. The group will create posters within this theme using graphic design which will later be posted up around the school for comment from other students.

The Committee was provided with a copy of their ideas on the subject of school and learning from the workshop held in March with staff from the Commissioner’s office. This gave them the opportunity to refine their comments about what helps or prevents children and young people to stay in school and enjoy learning and education.

Committee member (and School Captain) Carl joined the Commissioner in the studio at ABC Great Southern to discuss the role of the committee and what children need to stay in school on the station’s breakfast program. 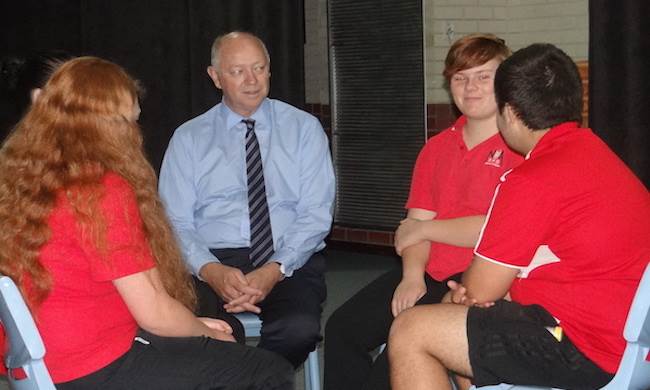