The Swan View Senior High School Advisory Committee is a group of 35 students from years 7 to 12 who are part of the Follow the Dream program and their Student Representative Council.

Follow The Dream is a voluntary program for Aboriginal students with aspirations to do tertiary studies and vocational education and training.

The Committee met with the Commissioner to present their final art project as well as celebrate their achievements over the year. The Commissioner was highly impressed with Swan View's mural and will be displaying a reproduction of the work in his office in 2017. The highlight of the final meeting was a video in which Committee members speak about their role and accomplishments over the year.

At the end of event, the Commissioner presented the Committee members with Certificates of Appreciation to acknowledge their contributions over the last 12 months.

Working with other students across their school, the Swan View Advisory Committee has created a wall mural which explores the theme of ‘unity’, a theme they identified as important to their learning and education. The mural was made with the assistance of Mullewa artist Noeleen Hamlett and measures 2.4 metres long. Words contributing to the theme of 'unity' were painted around the rainbow serpent (representing creation), and concentric circles painted to represent people coming together for learning at the school. Rainbow colours were chosen to reflect the many different cultures and beliefs of the students and the wider school community.

The mural will be officially unveiled to the Commissioner in December before eventually being displayed in the school’s canteen area. An image of the artwork can be seen in the gallery below.

The Committee has chosen to complete a creative project in Term 3 which links to their ideas about what helps young people to enjoy education and provides the opportunity for other students from their school to get involved. The Commissioner's Aboriginal Community Engagement Officer, Will Hayward, visited the school to workshop their ideas for their artwork. Their chosen theme for the artwork is ‘unity’ as the group felt it was an important value to have in a school. A local artist will be commissioned to work with the group to develop a multimedia artwork which may be displayed later outdoors at the school.

The Committee was provided with a copy of their comments and ideas on the subject of school and learning from the workshop staff from the Commissioner’s ran in March. This gave them the opportunity to refine their comments about what helps or prevents children and young people to stay in school and enjoy learning and education.

The Commissioner visited Swan View Senior High School to meet the members of his Committee. He was given a tour of the school by Student Representative Council members Tenae, Tremayne and Emma. They showed him the school’s performing arts theatre, Clontarf Academy room and Waggyl room, which supports the tuition of Aboriginal students after school.

Afterwards, the Commissioner talked with the Committee about the things they thought made school a great place for students to come to. 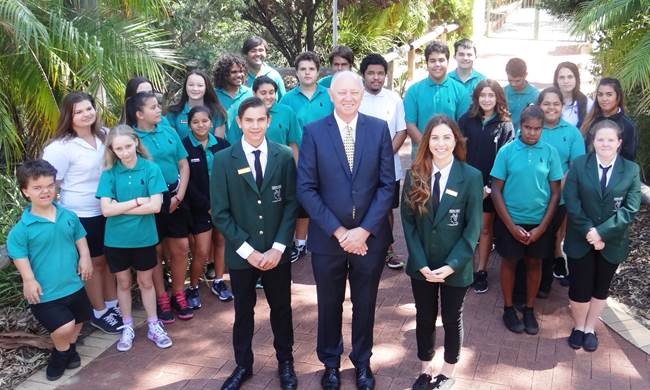