Wyndham District High School Student Leadership Team Advisory Committee comprised 10 children from across the junior and senior years who were involved in community engagement at their school.

The students worked on building their confidence and conversation skills with people who they did not know. 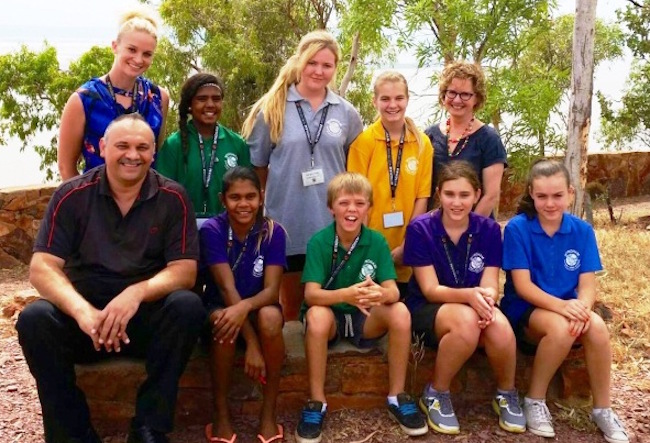 The Committee considered the issue of mutual respect and were keen to produce a movie or multimedia presentation to share with the Commissioner aspects of their lives in a remote part of Western Australia.

The Wyndham Advisory Committee presented their final ‘Us and Our Community’ report as a video to the Commissioner. The group filmed around their town and discussed the positives and challenges of life in Western Australia’s most northern town.

Some of the many positives about life in Wyndham as seen by the committee included the sense of freedom, the landscape, fishing and boating and the many swimming holes. On the weekends the young people liked to visit the local pool, watch the local football team, play basketball at the local recreation centre and hang out at the skate park and outdoor cinema. Being close to friends and family and the safety they feel in knowing everyone in their town a small town were other strengths of Kimberley life.

The students identified issues such as the lack of employment opportunities for young people, the cost of housing and healthy food, as well as the easy availability of cigarettes and alcohol as the main negatives in their community.

The Wyndham Advisory Committee planned interview questions and storyboarding their ideas for a short film. The students intended on visiting the Glen Hill community in late October to interview local young people about life in the Kimberley, what they like about where they live and what the challenges are growing up in a unique part of Australia.

Advisory Committee members were involved in giving feedback to the Commissioner on the development of a book of profiles of Aboriginal and Torres Strait Islander children and young people. The students were asked for their thoughts on the content, look and feel of the publication. The group also came up with the publication’s name, This Is Me.

Acting Commissioner Jenni Perkins and Advisory Committee students featured in The Kimberley Echo, discussing their roles and plans for their 'Us and Our Community' project.

This was a great opportunity for the students to practice their public speaking and exciting to hear themselves on the radio!

The Student Leadership Team who make up the 2015 Advisory Group met with the Acting Commissioner Jenni Perkins for the first time to outline their 'Us and Our Community' project.

As part of the visit, the students organised a guided tour of their school and a tour around Wyndham, including a visit to The Bastion lookout to see the surrounding countryside, a stop for a slushie and also taught the Commissioner how to do the ‘Wyndham way’ hand signal!

Back at the school, the students discussed planning for their Us and Our Community project and how they were proposing to produce a short film for the Commissioner on the issue of respect.

The Commissioner was pleased to have the opportunity to meet with the students in their local community and she was impressed by their organisation skills in both planning her visit and taking the initiative to show her around the local community.