Emily Hardbottle was announced as the recipient of the 2015 Commissioner for Children and Young People Participate Award.

Fifteen year-old Emily, from Santa Maria College, has displayed unwavering compassion and selflessness in her work to make a positive change in her community and to give young carers a voice.

As a carer for her younger sister Lauren who has Spina Bifida, Emily has dedicated herself to improving the lives of children with disability to create a more inclusive society, playing an instrumental role in the setup of a new Wheelchair Basketball program in Melville.

The idea was born having witnessed first-hand the challenges her sister Lauren experienced when trying to take part in sporting activities as a young teenager with a disability, particularly relating to travel. 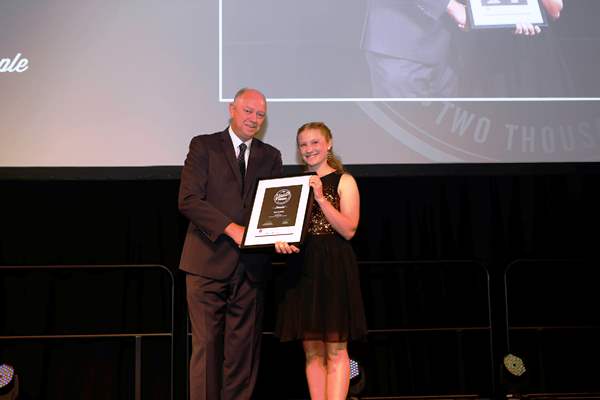 Knowing the physical and social benefits of participating regularly in sport, Emily saw a real need in her community for more sporting opportunities.

Not wanting her sister to miss out, the program started with Emily speaking to the local Melville Council in collaboration with Wheelchair sports WA and Melville Recreation Centre. Following several meetings organised by Emily, she was able to negotiate free basketball court hire and secured grants to cover ongoing court hire costs so that the program could continue.

The program is now currently full with 14 eager and keen participants every week with a mix of participants with and without disabilities.

Emily is also part of her local Youth Advisory Council, is a volunteer at Young Carers WA and was recently announced as the Young Carer representative for Western Australia.

Danikka Calyon is a 17 year-old Noongar girl from the Armadale community. She is an active role model in her community, with a well-known and respected reputation for promoting the health and wellbeing of Aboriginal children and young people.

For the past three years, Danikka has showed great enthusiasm and commitment to mentoring and coaching her younger peers. As a result of her can-do attitude, she has been given some valuable opportunities to better herself and her community.

Today, working with the City of Armadale and Save the Children, she is a proud and confident person who hopes to continue to be a strong voice for the Aboriginal community.

Aaron is a Year 9 student at John Tonkin College enrolled in the Surf Science Specialist program. The program encourages students to take responsibility for their own learning and become involved in various research projects. The focus of the projects is the Mandurah Estuary.

After being inspired by his study of dolphins in the Estuary, Aaron developed the Dolphin Fin Guide for the Mandurah Dolphins, used by the community to identify dolphins and record sightings, with data used by scientists and researchers. He also coordinated a local forum to share information about the dolphins to launch the Estuary Guardians group, which he founded.

Not only passionate about marine life and the environment, Aaron is also a corporal at 504 Mandurah Army Cadets, represented the school in the State Schools Sailing Championships, is a student councillor and a Bush Ranger Cadet.

Shannieka Martino is a 15 year-old Aboriginal girl with a positive nature and a bright future. A Year 10 student at La Salle College, Shannieka is passionate about building an inclusive and enjoyable community through exercise and recreation.

Shannieka has recently taken on a youth leadership role with the youth mentoring charity, Leading Youth Forward, where she acts as a voice for her peers, and assists the charity to continue delivering positive experiences to some of Perth’s most ‘at-risk’ youth.

She has developed a passion to address the challenges facing children living in out-of-home care, and participated in Uni Camp for Kids, is a gymnastics teacher and represented Western Australia at CREATE’s National Conference, “Youth for Change”.