Participation in early childhood education programs is considered to have a number of benefits for children, including improved cognitive and socio-emotional development and good preparation for the transition to formal schooling.

Overview and areas of concern

Data is available on whether WA children are participating in kindergarten.

Under the National Partnership Agreement on Early Childhood Education, the Commonwealth, State and Territory governments committed to ensuring that by 2013, all children would have access to high quality early childhood education programs in the year prior to full-time schooling delivered by qualified early childhood teachers, for 15 hours per week, 40 weeks of the year.1

Children in WA have access to Kindergarten which is a non-compulsory pre-school education program offered in the year prior to full-time schooling (Pre-primary). Children can attend Kindergarten from the beginning of the year in which they turn four years and six months. Kindergarten is offered through schools, in stand-alone Kindergartens and can be integrated with day care.

Pre-school programs are referred to by a variety of terms across states and territories.3 For more information, refer to the Explanatory Notes of the Australian Bureau of Statistics’ Preschool Education data collection.

Most eligible WA children (97.6%) are enrolled in Kindergarten in the year before beginning full-time school (Pre-primary).

While Kindergarten is the first year of formal education in WA, it does not follow a formal syllabus with assessments and reporting. Under the banner of early childhood education and care, Kindergarten programs are informed by the Kindergarten Curriculum Guidelines and Early Years Learning Framework and aim to meet the quality benchmarks set out in the National Quality Standards (NQS).

Kindergarten is a non-compulsory pre-school education program offered in WA in the year prior to children’s first year of full-time schooling (Pre-primary). Children can attend Kindergarten from the beginning of the year in which they turn four years and six months. Kindergarten is offered through schools, in stand-alone Kindergartens and can be integrated with day care.

This measure is informed by data provided by the WA Department of Education and presents the number of enrolments and attendance (in government schools) of WA children in Kindergarten programs from 2014 to 2017.1

Number of enrolments in Kindergarten programs by sector, number, WA, 2014 to 2017

The Australian Bureau of Statistics collects enrolment data for ‘pre-school’ programs across Australia that includes numbers of WA children attending Kindergarten in a non-school setting. The total shown for WA is not the same as the total shown by the WA Department of Education data due to differing data inclusion limits.

Enrolment of 4 year-old children in Kindergarten, number and per cent of children, WA, 2017

* This data is sourced from the ABS Preschool Education 2017 table. The totals in this table do not sum, per the ABS this is due to the cells in the table being randomly adjusted to avoid the release of confidential data.

Each state and territory has a different approach to education in the year before full-time school and therefore comparisons across jurisdictions are not recommended.

In 2017, 6.6 per cent of all WA Kindergarten students were Aboriginal. These proportions are similar to the proportions recorded for 2014. In absolute terms, the number of Aboriginal students enrolled in Kindergarten programs increased slightly from 2,171 in 2014 to 2,207 in 2017. This is commensurate with the population increase over the same time period.

Number of Aboriginal students enrolled in Kindergarten programs, number and per cent, WA, 2014 to 2017

Based on the Australian Bureau of Statistics, Estimated resident Aboriginal and Torres Strait Islander and Non-Indigenous populations in WA at 30 June 2016, the proportion of Aboriginal children enrolled in Kindergarten was approximately 94 per cent.2

In 2017, 71.8 per cent of all Kindergarten students in government schools attended regularly. This proportion has increased slightly since 2014. The term ‘regular attendance’ denotes students who attend 90 per cent or more of available time.

Kindergarten students in government schools who are in the ‘regular attendance’ category by Aboriginal status, per cent, WA, 2014 to 2017

Kindergarten students in government schools who are in the ‘regular attendance’ category by Aboriginal status, per cent, WA, 2014 to 2017 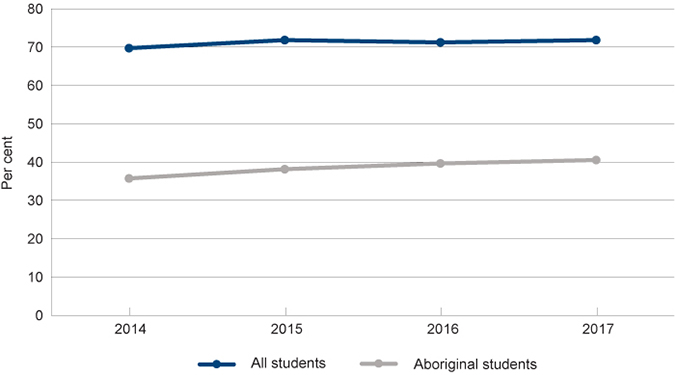 There is no data available on regular attendance at Kindergarten in non-government schools.

Research has shown that regular attendance at school is essential to academic achievement. Furthermore, low or irregular attendance patterns are established early and are often influenced by factors that are present prior to school entry.3 It is therefore important to address low attendance rates (and any related barriers) in Kindergarten.

National Quality Standards (NQS) that apply to early childhood education and care services also apply to Kindergarten delivered in a school setting.4 The approach to implementing the NQS in WA schools has been jointly developed by the Departments of Education, in consultation with the Catholic and independent school sectors. Individual schools annually report on how their school is meeting the quality standards.5 This data is not publicly reported.

Children in care often experience poorer educational attainment and life outcomes.2 Access to quality early learning can assist the developmental needs of children in care by promoting their cognitive, social and emotional development, aiding early intervention for developmental vulnerabilities and preparing children to make a successful transition to school.3,4

Research shows that participating in an inclusive early learning program in the year prior to commencing full-time school leads to positive behavioural and developmental outcomes for children with or without disabilities.2 Inclusion of children with disability in early childhood programs can set a trajectory for inclusion across the life course.3

Kindergarten program providers have additional obligations under the Disability Standards for Education 2005 to ensure that students with disability can access and participate in education on the same basis as other students. To ensure equal access, services may need to seek support and resources to fully include all children and meet high quality outcomes.4

Analysis of the Australian Early Development Census data suggests that children with special needs5 are less likely than other children to be in early childhood education and care prior to starting their first year of full-time schooling (Kindergarten in WA). However, this finding is not supported through analysis of Longitudinal Study of Australian Children data, although this may be due to differences in variables used to identify children with special needs.6

No data exists on the number of WA students that enter Kindergarten with a diagnosed disability, what they are diagnosed with or the types of support provided.

Successful participation in early childhood education is a key contributor to attaining positive life outcomes1 and attendance is a good indicator of engagement. Research by the Telethon Kids Institute demonstrates that children who start school with irregular attendance are more likely to continue attending irregularly, and that this has a significant and negative impact on their academic achievement and school engagement.2

One of the key targets of the National Partnership Agreement for Indigenous Early Childhood Development is to ensure access for all four year-old Aboriginal children, particularly in remote communities, to early childhood education. In WA, the target to have 95 per cent of Aboriginal four year-olds enrolled in Kindergarten is on track.3

The Australian Government has recognised the importance of attendance to the educational achievement of Aboriginal students through the decision to target closing the gap in school attendance between Aboriginal and non-Aboriginal students. To improve attendance, it is important to understand that early childhood education and care cannot be separated from child, family and community health and wellbeing.4

Education policies must recognise the wider social and cultural environment in which children live.5 Adopting a community development focus that involves active collaboration with Aboriginal communities is associated with positive educational outcomes and therefore recommended.6 It is also critical that Kindergartens and other ECEC environments recognise the strengths of Aboriginal children and their culture and provide a culturally safe place for Aboriginal children to learn.7

While research shows that attendance at Kindergarten can enhance developmental outcomes for all children, there is very little Australian research on the effectiveness and efficacy of particular early learning programs and practices, especially for Aboriginal and vulnerable children.8 To improve learning outcomes for children experiencing disadvantage in WA, an investment in the evidence base of what works in early learning interventions for vulnerable children is required.

It is also essential that data is collected on Kindergarten attendance levels of children in care and children with disability. These children represent some of the most vulnerable in WA and successful and consistent participation in early childhood education is essential to support their current wellbeing and future life outcomes.

For more information on formal early learning refer to the following resources: