From birth, children require secure, stimulating and responsive care to ensure healthy early childhood development. Child care, that is care provided to a child by someone other than their parent(s) or legal guardian(s), can be provided formally, through child care providers or informally, through grandparents and other relatives, friends, neighbours or nannies.

Overview and areas of concern

Limited data is available on whether all WA children aged 0 to 5 years are provided with quality informal learning opportunities.

The quality of care provided to children from birth to three years however is a key factor with poor quality care environments having been shown to have a detrimental effect on development.3 Formal child care services in Australia are regulated against National Quality Standards.

While one-half of all WA children under two are solely cared for by their parents or guardians (55%), a growing number of families use child care arrangements that involve formal or informal care or a combination of both.

Type of care usually attended by children aged 0 to 5 years, by age group and type of care arrangement, per cent, WA, 2017 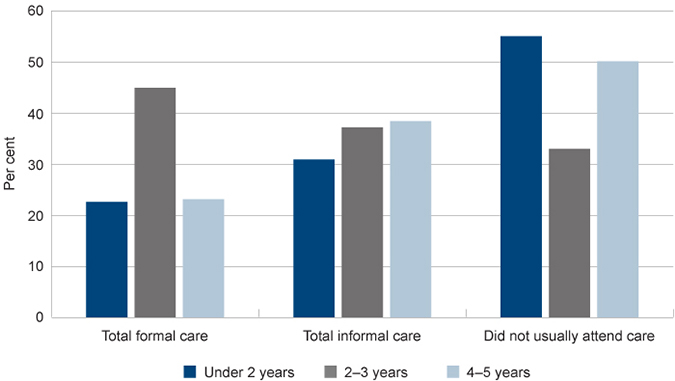 One-third of centre-based child care services are not meeting, but are working toward, National Quality Standards.

While many WA children are solely cared for by their parents, a growing number of families use child care arrangements that involve formal or informal care or a combination of both. 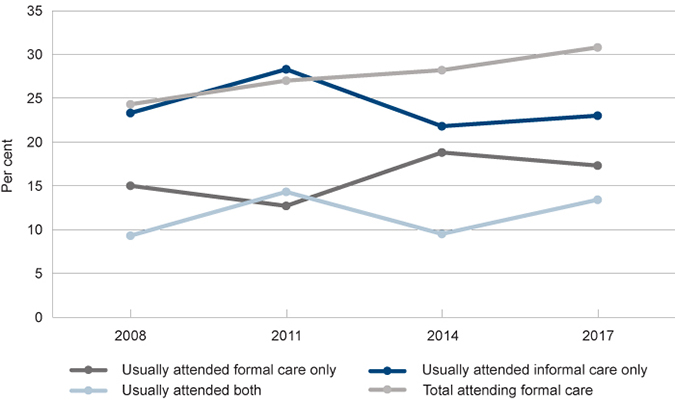 The data collection 4402.0 Childhood Education and Care by the Australian Bureau of Statistics presents data on the care arrangements used by WA families.1

Type of care usually attended by children aged 0 to 5 years, by age group and type of care arrangement, number and per cent, WA, 2017

Note: Totals may not add as cells have been randomly adjusted to avoid the release of confidential data and children could use more than one type of care.

* Estimate has a relative standard error of 25 per cent to 50 per cent and should be used with caution.

In 2017, 22.6 per cent of WA children under the age of two and 44.9 per cent of two to three year-olds attended formal care, with the large majority of them receiving care in a long day care setting. As children transition to Kindergarten and Pre-primary from the age of four, a much lower proportion attends long day care (13.0%) but 23.1 per cent still receive formal care, mostly in outside school hours care.2

Overall, three in four WA families with children aged 0 to twelve years who are using formal care, do so for work-related reasons.3

Informal care occurs when families rely on grandparents, other relatives, friends, neighbours or nannies to care for their children. Thirty-one per cent of children under the age of two received informal care in 2017, as did 37.2 per cent of two to three year-olds and 38.4 per cent of four to five year-olds.

In terms of informal care arrangements, grandparents are the most common informal care providers for their grandchildren. Furthermore, a higher proportion of WA children aged 0 to two years are cared for by their grandparents than in a long day care environment. Strong relationships are important to children’s positive learning and life outcomes and informal care arrangements with trusted family members and local community help provide a supportive environment for the family.

The main reason families use informal care for their children from birth to 12 years is to enable parents to work (60.5%) and for personal reasons (27.0%).4

Around one in two WA children under the age of two years (55.0%) and one in three children aged three to four years (33.0%) are not participating in any regular non-parental care arrangement.

While children from disadvantaged backgrounds stand to benefit the most from quality ECEC, they are least likely to attend.7 Barriers to participation for these children include cost, transport, lack of interest in and knowledge of the benefits of ECEC.8 Research into Aboriginal families across Australia also found that a distrust of institutions and concerns about being judged were significant barriers.9

The ABS data is not disaggregated by Aboriginal status.

The Longitudinal Study of Indigenous Children (LSIC) collects data on two groups of Aboriginal and/or Torres Strait Islander children those aged six to 18 months (B cohort) and three and-a-half to five years (K cohort) when the study began in 2008.10 The Wave 3 report published in 2012 reported on the children’s participation in child care and play groups.

This study found that around 27 per cent of the participating children attended a play group or other baby group. The main reasons cited by parents for their children not attending a play group or equivalent was the ‘child not needing it’ (32.0%) and the child is currently attending day care, Kindergarten or Pre-school (18.0%).11

About 33 per cent of children in the B cohort attended some form of child care, day care or family care. Children attended child care mostly because of the primary carers’ work commitments (47.7%) or because the primary carer thought it would be good for the child’s social development (34.6%).12

No data is available on the participation of WA Aboriginal children in formal and informal child care.

A new quality standard in ECEC services was developed in 2012, in which all Australian governments agreed to work together to provide better educational and developmental outcomes for children.14 The National Quality Framework (NQF) is a national approach to regulation, assessment and quality improvement for ECEC and outside school hours care services across Australia.15

ECEC services are assessed against the National Quality Standard (NQS) by the Australian Children’s Education and Care Quality Authority (ACECQA).16

In WA, ECEC programs delivered in a school setting (that is Kindergartens) are administered by the Department of Education (not ACECQA) and quality data is not published. The following data from ACECQA is therefore principally reporting on services delivered in child care settings and provides a good indication of how the formal child care sector is performing.

Number and proportion of services by sub-type, number and per cent, WA, 2018

* Working Towards the National Quality Standards means the service provides a safe education and care program but there are one or more areas identified for improvement.17

The number of WA services with a quality rating has increased significantly over the last three years from 53.3 per cent to 90.6 per cent. In spite of falling short of the national average of 93.2 per cent, this is a positive development.

While data is not available for WA, services across Australia that are rated overall as ‘Working Towards’ the NQS or Significant Improvement Required are disproportionately located in areas of socio-economic disadvantage.19

For further information on the WA results, refer to the latest NQF Snapshot.

Children in out-of-home care can benefit from high quality formal child care that exposes them to a nurturing and responsive learning environment while also providing respite for the child’s carer(s). Early childhood education and care has a beneficial impact on a child’s cognitive, emotional and social development as well as improving later school and life outcomes.1 Children in out-of-home care should have equal access to these services.

No data exists on the participation in formal or informal child care of 0 to three year-old WA children in care.

The Pathways of Care Longitudinal Study (POCLS) is a longitudinal study on out-of-home care (OOHC) in NSW which examines the developmental wellbeing of children and young people in care aged 0 to 17 years.3 The study collects data regarding the type, and number of hours, of child care attended by children in care but does not assess the quality of child care attended.

Preliminary findings in this study show that 52 per cent of nine to 35 month-old children, 90 per cent of three year-olds and 96 per cent of four to five year-olds attend some form of child care or early childhood education. It was noted that it was not possible to determine the proportion of children receiving an early childhood education program from this data.4 As low quality care can have a negative impact on a child’s social-emotional difficulties, a recommendation from the study is that case workers assist carers to identify high quality child care providers.5

High quality early childhood education and care is informed by child-centred educational programs and practices and allows for individualised support that will address the diverse learning needs and abilities of all children.2

In the case of disability, high quality formal child care can enable early assessment and intervention. It can also assist families to find the appropriate support and services that can help their child develop and learn to their full potential. Further, formal and informal care arrangements can also provide regular respite to parents and carers of children with disability.

In Australia, all early childhood service providers have a legislative obligation to make reasonable adjustments for children with disability under the Disability Discrimination Act 1992.

No data exists on the formal and informal care arrangements of children with a disability.

Quality care and education can occur in a formal and informal context. Young children are learning constantly and the quality and reliability of a young child’s relationships are essential to healthy development. Having nurturing and attentive carers is a key measure of quality in any child care setting.3,4

Quality is important; research has found that poor quality child care can have a detrimental effect on a child’s language, cognitive development and social behaviour.5 For very young children (0 to two year-olds) who are not disadvantaged at home, the benefits of attending child care are contested.6

The quantity of care also plays a role in shaping child development. There is some evidence that longer attendance at day care for very young children may be associated with poorer developmental outcomes.7,8

More than one-half of WA children under the age of two are looked after solely by a parent and it is therefore important to support parents in providing a nurturing and stimulating home learning environment. For more information, see the Informal learning opportunities. indicator.

High quality child care can be effective in supporting parents in their parenting role and helping families form social networks.9 Furthermore, participation in early learning and care helps lay the foundations for a positive working relationship between parents and educators that will be required to ensure a child’s successful transition to, and positive engagement with, school.10

There is evidence that children from disadvantaged backgrounds gain particularly strong benefits from attending high quality child care as it provides them with a supportive environment for cognitive and socio-emotional stimulation and learning.11,12

The particular benefits of quality ECEC for children experiencing disadvantage or with special needs include early identification of any learning or developmental difficulties.13 Early intervention is most effective when it addresses both children’s and their families’ needs, taking into account the context in which they live.14

However, lack of availability of quality ECEC in low socioeconomic areas is a barrier to participation for children experiencing disadvantage. Achieving equitable outcomes for all WA children involves ensuring access to high quality affordable early learning programs in areas close to where they live. Increasing the supply and quality of ECEC in low socioeconomic areas requires specific and targeted policy intervention.15

For Aboriginal children, attendance at early childhood services cannot be separated from child, family and community health and wellbeing.16 Early childhood education and care in the Aboriginal context, is more effective when programs are culturally sensitive and actively involve the community in planning, development and implementation.17

Data about the quality of informal care that children receive is limited. Longitudinal data on children solely receiving informal care would be beneficial to provide a better understanding of the scope and quality of care provided to children and what supports are needed to assist carers.

For more information on early childhood education and care refer to the following resources: